As believers, the path that we’re on—the Christian life—was forged by Jesus Christ. Many years ago, there was a chasm between God and man. Man could not hope to cross that chasm, so God did something—He laid down the cross so that man could walk that precious plank from death to life.

Paul said Christ is the author and the finisher of our faith. The word finisher means “done, completed.” He started the work, but He didn’t just leave it for somebody else to complete. Jesus started it, and He finished it.

A few years back, I heard a preacher on television say that when Jesus was hanging on the cross and He cried out, “It is finished,” that He didn’t really mean what He said there; He didn’t really finish the work. That preacher said angels had to finish it for Him. When I heard that, I thought, “Brother, what do you think ‘finish’ means?” Apparently he didn’t have the same definition of “finish” that I had. When somebody says, “I’m finished,” it means “I’m done; there is nothing else left to do.”

That’s exactly what Christ did—He finished it, and then He sat down at the right hand of the Father signifying that His work was completed, flawlessly. Hallelujah! Glory to God! You can’t outdo the cross! Christ is the finisher; He completed it. Nothing else needs to be added. Paul tells us how to run this race, how to lay aside the sin and the weight that so easily besets us by looking to the one who finished.

Have you ever looked up to somebody? I’m not talking about an idol, just someone you’ve admired—a person who has maybe endured some challenges that you haven’t and made it through to the other side. We look at individuals like that and say, “If they can get through it, then I can get through it.” It’s one thing to admire a person who has gone through some ups and downs in life and come through them, but it’s an entirely different matter altogether to look unto Jesus—the author and the finisher of our faith—the one who started it and the one who completed it. This signifies the growth, if you will, of our faith—its beginning, development, and ending. It shows us where our faith should be, and where it should never leave, which is in Jesus Christ and what He did at Calvary.

In college, I remember listening to a speaker. He was older then, so I don’t know if he’s still alive or not. In chapel service one morning, he stood in front of about 5,000 of us, and he said, “If you just look in the crevices, in the corners of where you are, you’ll see angels. If you squint your eyes real tight, and you look in the distance, at the corners of the buildings, you’ll see angels.” And I thought, “Why is his focus on angels? Our focus should be on Christ.” I’m not demeaning angels, but they didn’t pay the price for my salvation, Christ did.

Paul said, “Who for the joy that was set before him endured the cross, despising the shame, and is set down at the right hand of the throne of God” (Heb. 12:2).
Jesus endured the cross. This means the cross had to be; there was no other way. Sometimes it’s difficult to comprehend what Christ left to come here. He left the splendor of glory to come down to a sinful world; He left the perfect place to come to a place that is so imperfect. Why? Because man’s sin was so horrible, and he was incapable of getting to God on his own. So Christ endured the cross.

We read in the gospels about the crucifixion of Christ and what He had to endure: The pain, the suffering, His beard ripped from his face, lashes on His back, a crown of thorns placed on His head, the carrying of His own cross up to Mount Calvary only to have nails pierced through His flesh. Once on the cross, He was made fun of, ridiculed, and spit upon. “If thou be the Son of God,” they said, “come down from the cross” (Matt. 27:40).

According to Roman custom of that day, no Roman citizen could ever be hung on a cross—that punishment was reserved for the most wicked criminals imaginable. It was the penalty for those whose crimes were heinous, evil, and vile. Christ did nothing, yet He was still crucified between two thieves. Why? Why did He have to suffer that shame? Because of us. The sin debt had to be paid, and there was no other way to pay it except through His death on a cruel, rugged cross. He endured all of that suffering, despising the shame, so that you and I would not have to.

God loved us so much that He sent His only begotten Son that whosoever believes on Him should not perish but have everlasting life.

As horrific as the cross was, Christ’s victory was that much greater. The apostle Paul said that Christ is now seated by the right hand of the Father, right by the throne of God. He’s seated, which signifies, once again, that the work was completed.

In Hebrews 10, Paul says the priests stood daily ministering in the temple. Their work was never completed. But Christ, who sanctified us through the giving us His body on Calvary’s cross, is now seated by the right hand of the Father. The earth was made His footstool, signifying that His work on Calvary’s cross was a finished, completed work, and His victory now becomes my victory.

Christ did not suffer just to give you a partial victory; He suffered and died to give you complete victory over the world, the flesh, and the Devil. His victory was won at Calvary’s cross so the believer can say, “Sin does not have dominion over me, and I can lay aside the weight and the sin as I look to Jesus Christ—the author and the finisher of my faith—through what He did at Calvary’s Cross. I am victorious because He is victorious.”

God’s grace can never fail, which means that the cross can never fail. No matter what happens in your life—failures or mistakes—get your eyes off of the problems, stand up, and put your eyes back on Christ and what He did at Calvary. Allow the Holy Spirit to work and help you get back on the right path, with your eyes looking straight ahead to Jesus Christ—the author and finisher of our faith. 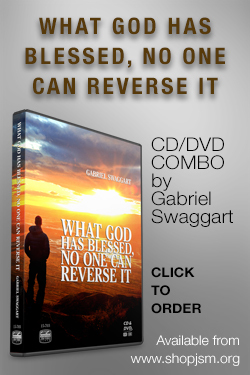